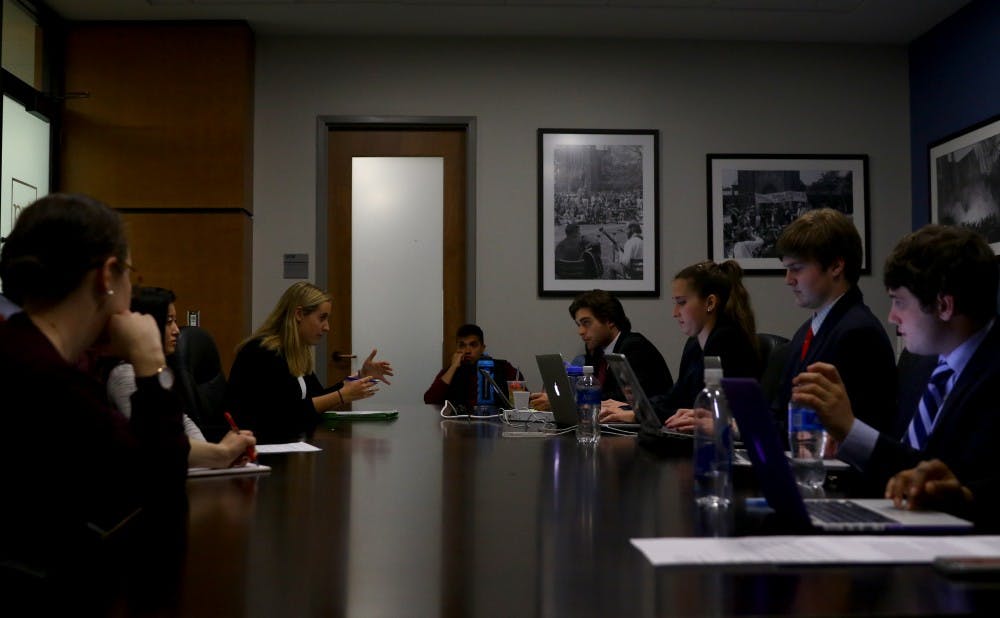 Every Tuesday at 7 p.m., a dozen undergraduates gather in The Link to decide how Duke’s more than 350 student organizations will be funded.

The SOFC once had a more obscure presence on campus: it had a reputation for being elitist, a group that catered only to certain student organizations with better knowledge of the fundraising process, according to current members. Organizations without this knowledge have struggled to access SOFC funds.

This year, however, OCGC is taking a decidedly different approach to its work, with more goodwill toward student groups and committee-wide reforms.

Junior Drew Flanagan, the current SOFC President, has worked to promote organization-wide reforms. You might recognize his name in the SOFC e-mails every few weeks.

Flanagan is now in his second term as OCFC President. He became the first sophomore to hold the position when he was elected in March 2020.

Before Flanagan became chairman, as a committee analyst, he was constantly frustrated with SOFC management and its lack of transparency. He didn’t know how the organization made decisions about its $1 million budget.

“For a long time, a lot of group leaders – especially cultural and identity group leaders – felt that things were decided arbitrarily by a group of students who – well, who put these students in charge?” he said. “The hearings were unproductive. They felt uninviting.

But Flanagan and his team tried to change SOFC’s organizational culture. Before, groups of students would come to a hearing, say what they had to say, and then leave immediately, Flanagan said.

“When I arrived, I was very intentional about wanting to go – and I thank a lot of people from the SOFC leadership team for making this possible – from an interview to a dialogue,” he said. he declares. “’How can we work together to make your event a success?’ It’s the conversation. Not ‘What do you need, what is the least amount of money we can give you?’

Get The Chronicle straight to your inbox

Sign up for our weekly editorially curated newsletter. Cancel anytime.

“We stick to our policies and keep them consistent,” Long said. “That being said, we encourage people to ask for money as much as they can. We had an orientation session for leaders of student organizations at the beginning of the year at which we had over 300 participants.

Senior Rebecca Williamson, president of a capella group Duke Out of the Blue, wrote in an email that her experiences with the SOFC “have been overall very positive.” She noted that the questions her group receives during the hearings are sometimes redundant given the request filed beforehand.

“That said, the students behind SOFC are all phenomenal at what they do, and I have nothing but respect for the organization,” Williamson wrote.

The Coop’s two co-presidents, juniors Riley Hicks and Claire Kraemer, wrote that they “had a super positive experience working with SOFC.”

“While we are still in the process of obtaining our fund code from [University Center Activities & Events] and it took longer than we would have liked, [SOFC’s] the guidelines were clear and the committee was welcoming during our hearing.

Despite their generous funding, OCGC still uses a technical and unambiguous approach to evaluating an organization’s budget proposal. During a hearing, a group planned to spend several hundred dollars on brochures for their event. However, it is a non-negotiable principle of OCGC policy to cap these expenses at $40. SOFC encouraged the student group to use QR codes instead.

In the past, the SOFC did not communicate clearly with student organizations, Flanagan said.

“If someone said, ‘My event is only open to certain people’, in the past we would wait for them to leave and then say, ‘Well, it wasn’t open to everyone, so let’s not fund it,'” Flanagan said. “They would find out after the fact and not necessarily get a clear answer. That was how a lot of bands felt. They felt that SOFC was a process you had to play.

To solve this problem, OCGC analysts and the management team adopted a stakeholder model to maximize the likelihood that groups could organize funded events. SOFC is increasingly recruiting members from all types of student organizations, such as DuArts, Duke Partnerships for Public Service, DSG, University Publications and, in the spring, the Duke Center for Multicultural Affairs.

Senior Hadeel Hamoud, Vice President of Policy and Outreach, has joined SOFC to help streamline its services and make them more “fair and transparent”. She published OCGC funding policies and guidelines, such as meal caps and speaker fees, in a accessible online hub.

Hamoud thinks the best way to make SOFC fairer is to democratize knowledge about it.

“Once a group has knowledge about [Committee] processes them and institutionalizes them, they can pass them on and get more out of SOFC resources,” she said. “When I was in those leadership positions, personally, I didn’t know that much. There are a lot of information biases.

Over the past two years, student organizations have become more knowledgeable about the SOFC, and many report having better experiences with the committee, Hamoud said.

Some of the other initiatives that Hamoud and other members of the executive have implemented include drop-in visits, revised email sends, greater funding transparency and a revamped disbursement request process. .

SOFC is currently undergoing a shift in its “culture, vision and spirit,” assuming not just the role of a funding body, but rather “a hub of activity and engagement on campus,” Flanagan said. during the SOFC spring semester report to DSG in February 2021.

“It’s usually a one-way conversation” between SOFC and student groups, Flanagan said at the time. “When I took over as president this fall, one thing we were really excited to see was a deviation from that and making us look more like a partner organization, rather than some mysterious, unknown, and really useless or uncommunicative.”

Weekly emails used to detail OCGC hearing times and procedures; now they spotlight student organizations and events. Previously, there was no public data on the amount of money requested or received by clubs; now that information is available on an online tracker with detailed notes explaining the funding gaps. Groups used to email Excel spreadsheets with their funding requests to Gmail accounts not affiliated with Duke; there is now a Duke Groups form instead.

“It was the big transformation that I was interested in,” Flanagan said. “How can we make this more inclusive, transparent and fair? »

Connor Booher is a sophomore at Trinity and a reporter for the 117th volume of The Chronicle.